When these uber patriotic holidays roll around, I tend to think of this classic. Maybe it’s best I don’t go into my personal politics and stick to Bruce adoration.

The lyrics, for those who think it’s just a fun sing-a-long about pride:

Come back home to the refinery
Hiring man says “Son if it was up to me”
Went down to see my V.A. man
He said “Son, don’t you understand”

I had a brother at Khe Sahn fighting off the Viet Cong
They’re still there, he’s all gone

In fact, he’s on his way to his therapist tonight, which in part explain the overalls. “I like them because they’re comfortable and they’re comforting,” he explains.

“Lou and I played music together, became best friends and then soul mates, traveled, listened to and criticized each other’s work, studied things together (butterfly hunting, meditation, kayaking). We made up ridiculous jokes; stopped smoking 20 times; fought; learned to hold our breath underwater; went to Africa; sang opera in elevators; made friends with unlikely people; followed each other on tour when we could; got a sweet piano-playing dog; shared a house that was separate from our own places; protected and loved each other. We were always seeing a lot of art and music and plays and shows, and I watched as he loved and appreciated other artists and musicians. He was always so generous. He knew how hard it was to do. We loved our life in the West Village and our friends; and in all, we did the best we could do.

Like many couples, we each constructed ways to be – strategies, and sometimes compromises, that would enable us to be part of a pair. Sometimes we lost a bit more than we were able to give, or gave up way too much, or felt abandoned. Sometimes we got really angry. But even when I was mad, I was never bored. We learned to forgive each other. And somehow, for 21 years, we tangled our minds and hearts together.”

Laurie Anderson on her loving relationship with Lou Reed. 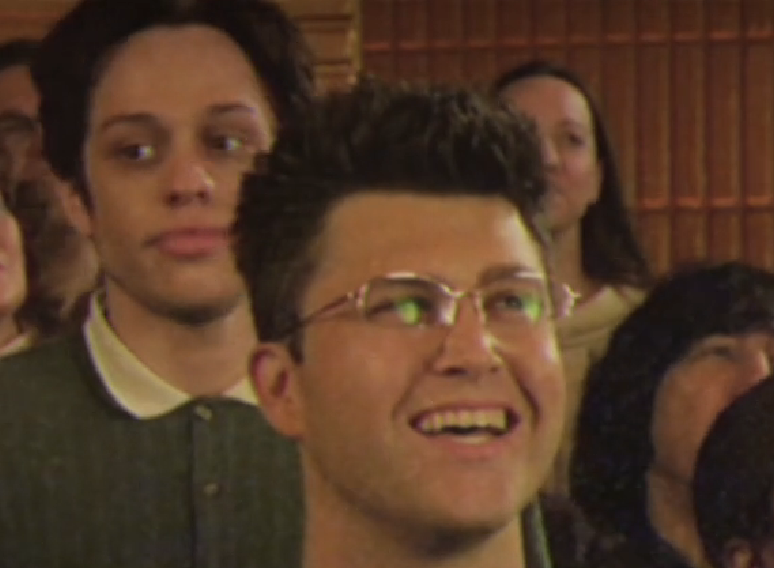 I just read that Bruce would often kiss Clarence on stage, “caught up in the frenzy” of performing.

Whatever it was about, I love it. Why weren’t there like animated cartoons, or comic books about these guys?

Oh Todd, if only that were possible.

A granola ad. This is such a far cry from the modern days ads in Rolling Stone.

Damn. It’s time I get into Randy Newman. At least his stuff before cartoon accompaniments.

Aidan and Bono? If I ever were to see those to together, particularly in 1985, I would have evaporated. Spontaneous combustion.

Look at those tresses on Tilbrook.

I know he’s had his questionable moments, but I still like him. I used to sneak down to the living room when I couldn’t sleep and find my dad watching his show. I probably didn’t keep my eyes open long after crawling up into his lap, but I absorbed an essence. Plus I always knew whatever my dad thought was cool, was legit.

Stipe in coveralls. It’s crazy that Peter Buck is the most attractive in this photo. For a brief moment in time. Mike Mills makes everyone who ever had a bowl cut feel a little bit better.

Sigh. Where can I find my Bruce? I’m listening to Born to Run (the album) as I type this.

I didn’t know this was a book first! or that Alan Zweibel wrote it!!! I need to read it. The movie was fantastic, and Zweibel, I hold in high esteem for his time at SNL and moreover, his special kinship with Gilda Radner. Read Bunny Bunny.

1985 wouldn’t be complete without a bit of Madge.

Frank Sinatra and fans. Does this type of boundary-crossing still occur? I feel like if there were repercussions for this lady, they wouldn’t be anywhere near as harsh as they would be today. Though, well worth it nonetheless.

Do I spy a young Jason Alexander? I would never have guessed that he modeled for Levi’s. Now that is some party trivia.

Patrick Swayze and C. Thomas Howell. I’m not sure who the woman is. I’m also not sure what the point of this spread would have been…according to the wealth of the internet, these guys didn’t have a movie in 1985… they did Red Dawn in 1984, and of course The Outsiders in 1983. Let’s just enjoy it for what it is then.

HERo! i rode the 1 train next to her for a few stops once. Magical.

Why couldn’t actual year book photos be as cool as these? (From the Rolling Stone Yearbook 1984.)

i lurve me some Michael Keaton.

Hold the phone kids. UHAUL used to rent out clunky portable vcrs? And called it Haullywood?! That just makes me think of Pauly Shore. I wonder how many of these things are in landfills.

Time to swing back to high brow.

Prince is manicured royalty. The precision that must go into maintaining such a look!

Young love. I can’t wait for Chrissie Hynde’s autobiography, due later this year.

Look at those eyes. Are you mad about having to get your photo taken, Bob, or that you’re not wearing a shirt?

Behold the engineering feat that was breakdancing sneakers.

Only for the elite!

May 1984. I went to grad school with a girl who didn’t know who Cyndi Lauper is. I was insulted by her ignorance. INSULTED.

I mean, the kid was raised in a strict religious home in the some podunk Southern town, so I guess that’s how such ignorance exists. Sad.

There’s a nice shirt Bob. And some overwhelming track pants on Dave. I wonder why he has his hands so timidly placed in front of his groin.

The brilliance of this image is dumbfounding.

This is such a lovely illustration for a film. I wish there were more ads like this.

I have a Blaupunkt in my 2004 Ford! The Ultimate in Complete Car Sound Systems. Supposedly.

What is he pointing at? Did he break his pinky? Is it crooked? He looks pretty out of it.

More nerdy Letterman, this time with a helping of Franken!

When the Camcorder was new. I think my aunt still has hers.

Talk about a boom time for technology. Leather briefs!

This cover is so beautiful. The composition, the color of the print. The fierce eyebrow game and cheekbones.

I couldn’t believe that multiple sclerosis made the pages of Rolling Stone. I’m sure my dad would’ve heard about this benefit for Ronnie Lane (Faces, The Small Faces), years before his own diagnosis. I wonder if he gave it a passing thought.

Perhaps more unbelievably, they dedicated an entire cover to Ronnie Lane’s fight, and his mates’ efforts to raise awareness. The charity concerts supported Action into Research for Multiple Sclerosis (ARMS) in 1983, which is an organization I had never heard of. This gets me in the feels.

Joe Strummer. A member of the elite group of men who have roamed this earth and shown me what men are capable of being, therefore raising my standards to an unconscionably high level.

They were such babies! Damn right the Stray Cats were great faces of 1983.

I wonder how many people wasted money on this.

Nylon billfolds is such a nicer way of saying velcro wallet.

Now those are power suits.

I can’t get enough of young Jerry Harrison. Patrick Fugit needs to play him in a movie.

Catherine O’Hara being all experimental.

A seemingly out of place, yet very welcome fashion spread about sunglasses.

You didn’t think I’d go a post without Hall and Oates, didja?

Bonus! G.E. Smith right under that 9!

I love this pose so much. it’s such a small gesture but it speaks volumes.

Gilda! Put down the soda!

And given the lace industry a boost.

This gave me newfound interest in Joan Baez. Obviously I know that she and Dr. Martin Luther King, Jr. were both alive and active in their respective careers at the same time, but seeing them together was like fitting a puzzle piece into a big puzzle. For some reason I don’t often think of folk music when I think of the civil rights movement, and vice versa, which is silly because they are so obviously relative.

Upon preliminary research, I learned that Baez is half Mexican and half Scottish. What a combination.

The McGarrigles! Featuring elementary-age Rufus Wainwright on the far left! I’m not sure which one is Martha.

I knew there was another picture of Brian Setzer in this grouping. So much look.

I daresay he got better with age.